skip to main | skip to sidebar

Only a few more days until the October Papertrey Release. Today I'd like to show you a fun holiday gift made with Heather's new Warm Happiness stamp set. Be sure to check out Heather's blog for yesterday's sneak peek of this fun new set. Whether you like coffee, tea or cocoa, it seems that we ALL like the cups and mugs that hold the delightful concoctions. Heather(I call her Pine) has designed a very fun stamp set that you'll be sure to use for the holidays and all year round.

My gift project for today is a *Cocoa for Two* box that holds two packets of instant cocoa drink mix. For the box I used Papertrey's clear card box and embellished the outside with lots of glittery snowflakes and dressed up buttons. Two lengths of Sweet Blush Ribbons were adhered to the outside of the box with double sided sticky tape.


For the main image, I used the mug and the shadow image along with three separate word sentiments(warm, cocoa, wishes) from the Warm Happiness set. To help speed the process along for mass produced holiday gifts, I used a circle punch and the Giga Scallop Circle Punch to out my images. Once assembled, I traced along the outer edge of the white circle with a fine tip glue pen and then sprinkled on some glitter. I added more glitter to the cocoa mug too. Stay tuned to my blog..I'll show you soon how I used the masking technique to create the cocoa mug with shadow images. 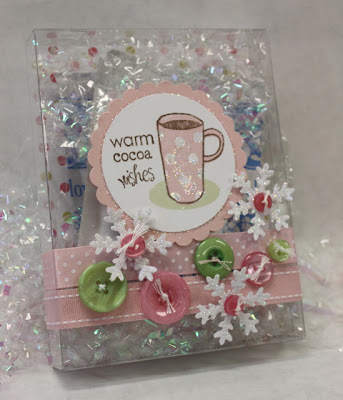 For the inside of my box, I cut out a piece of delightfully fun Polka Dot Parade patterned paper that is being released this month. I cut it to fit snugly inside the back of my clear stationery box. I then stamped some more circles with a cute friendship sentiment from the Warm Happiness set. The word *cocoa* was stamped separately, as there is an option to add the words cocoa, coffee or tea to this sentiment. Clever! I cut out my circles using Spellbinder's Circle Nestabilties. While the metal die template was still on the cut out circles, I traced the inside of the circles with a fine tip glue pen. I then added some glitter for a little extra sparkle. I stuck the circles with sentiments onto two cocoa packets using foam pop dots. Then the cocoa packets get nestled into the stationery box with some iridescent filler. Be sure not to fill the box too full with filler or else the polka dot paper won't peek through. 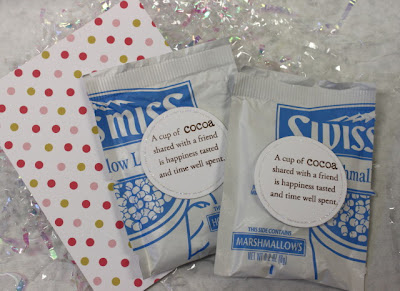 Here's a closeup of the fun accents on the outside of the box. I'll show you how to make the glitterfied snowflakes, they're so much fun!! 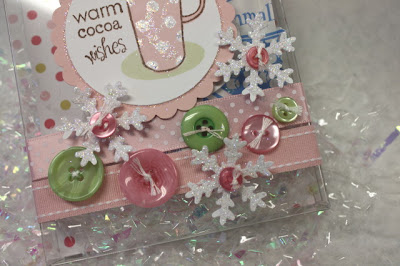 First, you punch out snowflakes using the Extra Jumbo Snowflake punch being released this month at Papertrey Ink. If you've been following Heather's blog, then you've seen that one of her new sets coordinates with a bunch of new snowflakes punches coming to Papertrey Ink this month. 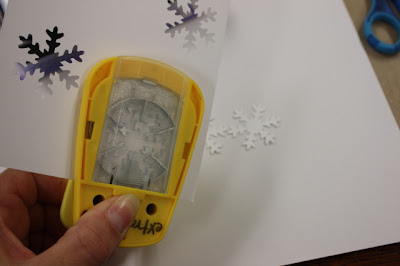 Next, place the punched snowflakes onto the surface of The Essential Glue Pad. You'll need to add just enough glue from the refill bottle that comes with the Glue Pad each time you plan to use the Glue Pad. This re-moistens the pad for just the right amount of stick. 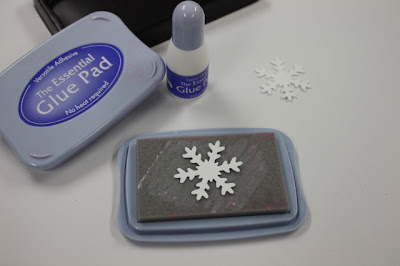 Using craft tweezers, dip the glue covered snowflakes into iridescent glitter and allow to dry for a bit. 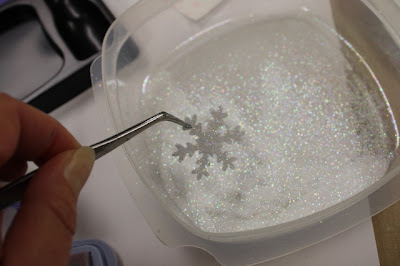 Do up some extras while you're at it so you can have plenty for holiday projects. Once you have a little heap of snowflakes piled up, get creative. I used buttons and embroidery floss to adorn my snowflake centers. To attach your fanciful snowflakes to your project, simply add one foam pop dot to the back of the snowflake. 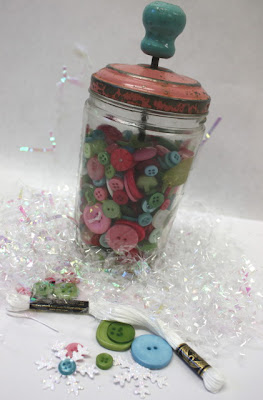 I'm almost wanting a little colder weather to be here so that I can start giving out some fun *Cocoa for Two* gifts. These would be perfect little treats for a friend or coworker or teacher. Since there are two packets, you could invite a friend over for cocoa and give this gift to them as a little favor. You could also attach a note to share the cocoa with a friend and then pass on the little gift box....kind of like the gift that keeps on giving. You might want to make one for yourself though because they're almost too cute to give away!

Be sure to visit Nichole's blog to see more sneak peeks of this month's releases. The excitement is in the air!

Oh my gosh! I LOVE these. Now I know what I'm making my coworkers this winter! Thanks for the inspiration!!

Mish, I am just in love with your PTI creations! OMGosh, how do you keep coming up with such fabulousness? I love everything about this project, from the glitter to the buttons!

So magical, love the colors!

Love, love, love it!! I'd better HIDE my PTI order!!!
And those SNOWFLAKES!!!!! Beautiful! You are SO creative....SO INSPIRATIONAL!!!

I can NOT wait (okay may I can) for this set to be released! I love everything about it!! Love your project and esp love the button jar! Ü

FAbulous!!! Your work is awesome!!!

This is a super gift idea. I love the colors you used. Can't wait for the release.

These are fantastic! I makes me want to build a fire! Okay maybe not today, it'll be 80. But soon!

this is one of the cutest items you've ever made!! I just love the sparkle, buttons and everything about it. awesome job!

Mish, I always always always love everything you make! This is such a cute idea, and Im always so thankful that youre always saying your gifst-cards could be given to a *teacher*... its wonderful knowing people truly appreciate our profession!

Mish, you are such a talent and inspiration. I've always admired your style and appreciate how you share your talents with others. Such a fabulous project!

I have a question for you that is non-stamping related. Can you e-mail me instructions for how you created your blog banner? I have photoshop elements 5.0 and I'm fairly decent at following instructions, just have no clue how to do the banner thing.

What a great idea. I am already plotting out my next PTI order!

simply adorable!!! i would love, love, love to receive that sweet little gift you created! and, i can hardly stand how cute your button jar is...a mixer, right? i have a similar one in reds...just perfect!
chelle

Oh!! I LOVE this, I could really use this!! I will surly have to purchase these goodies to make these goodies,to share these made up goodies!! Laurie

SO cute!! Love the button centers on the snowflakes.

What a fun and adorable package!! Very creative!! I also love your button holder:)

This is absolutely darling. I love this color combination. And it looks like something a little girl would love to pull our of her stocking on Christmas Morning:)

LOVE it Mish!! I always love the ideas you come up with....what a sweet gift that would be for a friend!! HUGS!!

I love this little box it so wintry and girly all in one. Love it. I can't wait for the release this month. Thanx for sharing! Stacy

Thank you for yet another great 'teacher gift' idea! And I love the colors, glitter, and snowflakes in this project. I try to read your blog every chance I get.

Hi Michelle! I just ran across your blog last night! What a collection of artictic creativity! I absolutely love your cocoa/coffee set! It is already on my lists of "gotta have's!". I am looking forward to seeing all of your beautiful creations. Thanks for taking the time to share.
Sending stamping blessings from way down south in Alabama!

What a FUN project. It looks so good too! Really like it, love all the glitter on the snowflakes, the buttons all of it. Thanks for the inspiration!

AWESOME IDEAS!!! Came across your blog recently & can hardly wait to check it daily now:) You're very talented & I love your gift ideas! This cocoa set will make a great stocking stuffer for my co-workers this year as well as family. Keep the ideas coming:)

This is SO ADORABLE! I love the pink/lime green!!! So cute vs. the traditional christmas red/green!!!!!

This is awesome! Wow, the colors, snowflakes, buttons...you come up with the most amazing creations! 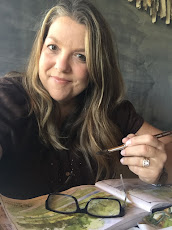 Made by Mish Big Cartel Shop

Promote Your Page Too

All content, including text, photographs and concept design elements are © Michelle Wooderson. Content within this blog is shared for personal/non-commercial use and inspiration only. Thanks!